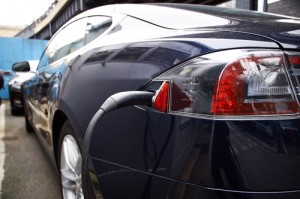 Recent car news reports reveal the new Tesla Model 3 is hugely popular, with 325,000 orders being placed within the first week ordering opened according to CEO Elon Musk who tweeted “Definitely going to need to rethink production planning.” Seems that everyone wants the new EV sedan!

March 31 was officially the first day orders were being taken for the Tesla Model 3, both at store locations and online where consumers could order around the clock. By April 2, only three days later, the order count was already up to 276,000. Now the problem is, how will Tesla fulfill the overwhelming number of orders? With production slated to begin late next year, the primary production plant is located in Fremont, CA – however the French government is urging the company to set up a factory to produce the electric cars in northeast France at the Fessenheim Nuclear Power Plant, which is scheduled to close next year.

It will be interesting to see how the $14 billion worth of orders will be fulfilled! One thing’s for certain – Tesla fans are enthusiastic, as some reports have said the hype and speculation prior to the March 31 unveiling rivaled that of the launch of an Apple product.

At CarMark Hawaii, we know people are passionate about the cars they drive. We buy used cars for cash in Honolulu, giving our customers a fair deal without the hassle of dealing with tire kickers and car dealers. Whether you are moving, no longer need your vehicle, or could simply use the money, we make the process easy and stress-free. If you’re in the market to sell your used car for cash on Oahu, give us a call today or fill out our online appraisal form. Qualifying is easy – if your vehicle has 100,000 miles or less and is a 2007 or newer model with a straight frame, we can work a deal.