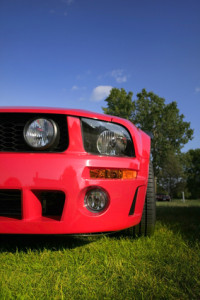 According to an article at Car and Driver, Ford will be bringing plenty to the Detroit auto show next month, including the Ford Fiesta ST, Focus RS, F-150 SVT Raptor, and the Mustang Shelby GT35oR.

Here’s what we’ve heard about some of the vehicles expected to be found at the Ford booth in the Motor City.

The Mustang Shelby GT35oR is said to be Ford’s answer to Chevrolet’s Camaro Z/28, with “just enough” padding and equipment mandated by the federal government to legally qualify to be licensed. Called a “track monster,” the GT35oR is expected to be just as at home on the track as it is on the street, super fast, and super sharp.

Perhaps the most anticipated unveiling will be of the new aluminum-bodied F-150 SVT Raptor, a truck we’ve been hearing a lot about in the media lately. Said to be charismatic and what Ferrari would build if the company were into 4×4 pickups, this F-150 is said to have super-wide bodywork that looks simply “awesome.” Riding like a Lincoln, this is the truck everyone’s been waiting to see up close and in person!

The 2016 Focus RS will likely also be unveiled at the show, however some believe it may make its debut in Europe instead in Geneva. Sources are fairly sure it will show up in Detroit, packed with nearly 300 horsepower. Maybe it will be unveiled both in the U.S. and Europe?

One thing’s for sure – Ford will be making waves in the Motor City next month. It is sure to be an exciting time for all who attend.

At CarMark Hawaii, we love Fords and we love staying on top of Hawaii car news. In fact, for those who are looking to sell your car for cash with no hassle or headache, we’ll buy your Ford and pay you on the spot as long as the car is in good shape, has 100,000 miles or less, and is a 2007 or newer model. That being said, we want Chevy and other brand owners to know we’re not biased – we buy them all! Bring your car to us first, we buy used cars for cash and have been in the business for more than two decades.