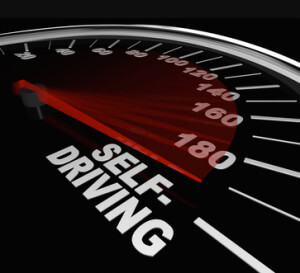 A recent article at ABC News reveals that Google’s latest version of the search engine giant’s self-driving car will make its appearance this summer on public roadways. According to Google, the pod-like two-seater is capable of driving, braking, and recognizing road hazards with no help from humans!

With a shiny black bowler that conceals the car’s sensors, some say it looks like a Smart car. The electric car can reach speeds of up to 25 mph, and must be recharged after 80 miles. In addition, Google’s self-driving car cannot navigate on just any roadways when it’s let out of the cage this summer – it can only drive in areas which have been thoroughly mapped by Google. Google’s top priority with the driverless car is to have these types of vehicles available to consumers in 2020. Google hopes that cars that are computer controlled will greatly reduce the human error factor, thus reducing the number of accidents and deaths each year.

According to the article, other automakers are also delving into the self-driving car technology, although they are in no hurry, as most have a timeline of developing their own self-driving vehicles over the next 10 to 15 years.

Who would ever have thought it would be possible for cars to drive themselves? Hopefully the technology will make for safer vehicles and fewer accidents, saving the lives of thousands of people each year once driverless cars become the “norm” in a couple of decades.

At CarMark Hawaii, we buy used cars in Honolulu – the traditional types of cars we’re all used to, not the self-driving kind, but we still like to keep up on all the Hawaii car news. If you’re looking to sell your car for cash, we invite you to call or come by and see us. Whether you have a 2007 Honda, 2007 Toyota, 2012 Ford or Chevy, or any other make/model that’s eight years old or newer, you can get the cash you need today. No jumping through hoops or red tape to wade through, the process is simple.