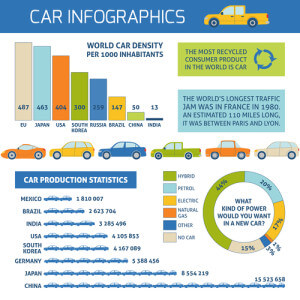 We buy used cars for cash in Honolulu, and have for more than two decades. In our business, we’ve come across quite a few interesting and fun car facts we thought readers would enjoy. Some of them you may be aware of, others maybe not. Enjoy!

Ever forgot which side of the car your gas tank is on, or been driving a car you’ve never driven and weren’t familiar with? Your car’s fuel indicator tells you which side it’s on – just look at it and you’ll notice a small arrow beside the icon. This indicates which side the gas tank is on.

How much gas does it take to start the engine? About 1/2 ounce, equivalent of a full shot glass.

How many parts does the average car have? Considering interior handle screws, visors, vents, side panel pins, and every other tiny detail, about 30,000 – try putting that puzzle together!

There was one day when Mr. Rogers wasn’t having such a beautiful day in the neighborhood – his car was stolen. Not to worry, though; once the thief found out who it belonged to, the car was returned.

How long would it take to drive to the moon? If you could drive straight upwards doing 60 mph, you’d reach the moon in six months.

What’s the top-selling auto in the UK? For four years straight it was the Ford Fiesta, with more than 100,000 purchased each year!

How many people can be crammed into a smart car? 19 – surely it’s similar to a can of sardines.

How tall was the world’s lowest street-legal car? Just 19 inches! Built by Perry Watkins from Buckinghamshire, the car was called the “Flatmobile.”

If you’re a fan of stock car racing, you may be interested to know these races originated when moonshine runners modified their vehicles in an effort to outrun the law.

We hope you enjoyed these fun facts! If you’re in the market to sell your used car, truck, van, or SUV for cash in the Honolulu area, count on CarMark Hawaii for fast, friendly service and cash on the spot for 2007 and newer models in good condition.