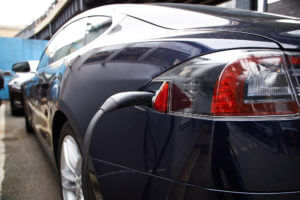 Car thieves have more to worry about these days than the vehicle they are stealing running out of gas. What about running out of power? That’s what happened recently in Arizona, after a woman lifted a Tesla from a shopping center parking lot. If it weren’t for bad luck . . . well, you know the saying.

Kathy Sain was no stranger to police, according to reports that say they knew her due to prior arrests for drug activity. Sain decided to steal an electric Tesla Model S from the Bashas’ shopping center, which was parked near a Subway restaurant. The shopping center does have a Tesla charging station, but it wasn’t clear whether the vehicle in question was being charged at the time it was stolen.

Law enforcement officials were in hot pursuit after learning the vehicle had been stolen, even placing spike strips in the roadway in an effort to thwart the theft, although it did not prove effective. Eventually, the Tesla ran out of juice and police were able to catch Sain, but had to break a window to remove her from the vehicle when she refused to exit. The woman was charged with two counts of failure to appear for prior arrest warrants, aggravated driving under the influence, criminal damage, fleeing law enforcement, and of course, theft.

How to Track a Stolen Tesla

Owners can track the location of a Model S, which can go a distance of up to 370 miles per charge. Probably not the best choice when stealing a car.

If you are looking to sell your used car for cash in Honolulu, look no further than CarMark Hawaii! You may need the cash to pay bills, or perhaps you’re being deployed and leaving the island. No matter the reason, we make it easy as pie! Now for an interesting (and somewhat comical) piece of car news.

At CarMark Hawaii we buy used cars for cash in Honolulu, giving you the best deal on your vehicle – paid for or not! Get cash today; it’s easy, just fill out our online car appraisal form and get the ball rolling.