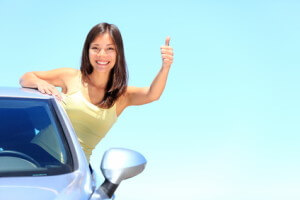 Over our more than 25 years in the cars for cash industry, the staff at CarMark Hawaii has certainly seen many changes not only in the auto industry, but those who drive cars. Today, more women than ever before drive cars, SUVs, and even trucks. According to a recent article at CBS News, women constitute 50.5 percent of all drivers.

What does this mean for automakers? Change. Because today’s consumers are comprised of at least 50% women, manufacturers will begin listening to the needs of women, and what they want in a vehicle. UMTRI (University of Michigan Transportation Research Institute) recently released the results of a new study indicating that the percentage of women drivers has risen substantially since the 1960s, when fewer than 40% of all drivers were women.

Research professor at UMTRI, Michael Sivak, says in the report that the impact of the growing number of women drivers is substantial, as factors such as energy consumption, vehicle demand, and road safety will be key for automakers. Autotrader has performed research that supports the UMTRI study, indicating that women are more likely than men to purchase vehicles that are more fuel efficient, safer, and smaller. Newer technologies that are of particular interest to women include keyless entry, backup cameras, blind-spot detection, and sensors.

While men value acceleration and cornering, women value styling (both interior and exterior) and interior amenities. For both genders, reliability and safety along with a fair price are important factors, according to KBB analyst, Akshay Anand.

There’s no doubt about it, cars have definitely changed over the past few decades. It seems that today, cars change and go out of style nearly as quickly as eyeglasses and smartphones!

If you’re in the market to sell your used car for cash in Honolulu, count on CarMark Hawaii for a fair deal with no hassles. We’ve been a leading used car buyer for a quarter of a century, so you can trust our friendly, professional staff! Give us a call today.