Some sources attribute the drop in car ownership to millennials in big cities, while others say ride-booking services may be to blame for the decline. Even further speculation debates the rise in the number of people working from home. However, some sources believe that the decrease may be a ‘tipping point’.  It can be difficult to know the exact reason behind the downward trend in automobile ownership. In some areas, people may also be prone to misinterpretation. 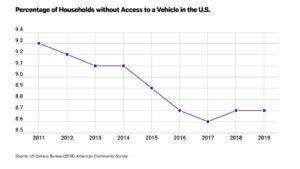 Still, regardless of the reasons, these statistics can be entertaining to observe. Moreover, they might just be a little bit of entertainment for you!

Car ownership over the past decade

New vehicle sales will continue to grow in the U.S., but likely at a slower rate. Experts are projecting about 2% per year. New modes of transportation may result in a decline in private car ownership but sales are likely to be offset by an increase in sales of shared vehicles.